How do we end school shootings? Part I

Every time I hear about a school shooting my heart aches for the ones who lost their lives and for those who lost their loved ones.  I then go back to thinking why is this happening and how can we make sure it doesn’t happen again?

The first reaction is to blame guns, but humans are not instinctively born to kill.  So I force myself to dig deeper.  What is causing humans to turn against each other in such callous and senseless acts? The answer is not a simple one.  There has to be something that is driving them to this point.  And it’s not just one thing, and it didn’t just happen overnight… something has been slowly creeping up on society and we need to act now before it’s too late.

To answer that question we need to take a step back and be willing to consider all the reasons why this could be happening, and we need to work towards addressing them systematically.

In my humble opinion, there are many variables to consider and talk about... killings are the final expression of many things that went wrong prior to the senseless act, the final action stemming from many untreated symptoms. Guns are just the tools being used (like knives in England). 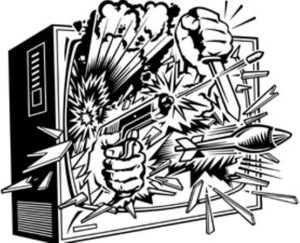 The systematic and overbearing propagation of violence-laden media, through the internet, television, movies, music lyrics, and video games, have created a brain rewiring effect that has desensitized people, young and old alike, has increased aggressive behavior while decreasing the ability to self-regulate and stop such aggressive behavior, has contributed to the glamorization of killings, and has consequently eroded the moral values that once helped us differentiate between good and evil.  In 2006 the Radiological Society of North America @rsna did a study that showed that playing violent video games has lingering effects that cause decreased activity in the areas of the brain responsible for control, focus, and concentration.  In 2009 the American Academy of Pediatrics @aapjournals released its findings on Media Violence and stated that “Although shootings in schools around the world periodically prompt politicians and the general public to focus their attention on the influence of media violence, the medical community has been concerned with this issue since the 1950s. The evidence is now clear and convincing: media violence is 1 of the causal factors of real-life violence and aggression.” @CNN wrote about it back in 2013 on an article titled “Gun violence in PG-13 movies has tripled” and noted there was already a rise in the use of guns in schools and other settings. In 2016 Psychology Today @PsychToday ran an article that show how “Violent video games can trigger emotional desensitization”.

There seems to be a slew of data showing the link between violent media and aggressive behavior but even though we’ve had this information for the last 9-12 years we have been either in denial or too busy to address it. It seems the responsibility now falls on the parents to step up the parenting, and on society as a whole to demand that the media produce content that builds our youth rather than destroy it.  No longer can we afford to stay uninformed about our children’s online and screen activities. We must stand strong and say “No” when our children demand to watch those PG-13 movies, play those violent video games, listen to the violent songs, or watch violent shows (either on TV or online). We must control what our children have access to and be vigilant, talk to them about being kind, respectful, obedient, and tolerant. A good start is to limit the amount of screen time kids/teens have, and control the content they have access to. You can read the #AmericanAcademyofPediatrics guidelines for screen time (and sleep needs) here.

We should call on the media to stop producing such violent content that is ruining society.  Have they lost the ability to create content that stimulates the brain by letting it do the work when things are left to the imagination? Have they lost their ability to create entertaining content that is not violent?  I was dumbfounded when I learned that this has been an issue since the 1950’s.   For the last 60 years we have been so preoccupied with fighting so many other social issues that we let this one creep up on us in such a manner that it has now become mainstream and expected.  We too were being slowly and systematically desensitized to think that this is all normal.

In an era of instant and ubiquitous information, it is almost impossible to control everything our children have access to. Radio, TV, movies, electronic gadgets, laptops/chrome books/iPads, digital media, etc.  According to a Bureau of Labor Statistics press release citing the Employment Characteristics of Families in 2017, almost 50% of families had a dual working situation where both parents worked. This makes for a very difficult task in trying to control information accessed by their children. But we are all consumers of information and entertainment, and as such have power over those that create the content.  How, you ask?  We can raise our voices and demand an end to violence in the media. We can start a movement to reclaim our children’s mental health by calling to #EndMediaViolence.  The media has a moral responsibility to society and we need to hold them accountable. If we really want to create change we need to stop giving the media what they want… our money.  Stop watching movies that are violent, stop watching violent TV shows, stop listening to music that contains violence, swearing, and disrespect, and stop buying videogames that emphasize violence.  The loss of revenue will send them a message and will cause them to listen and take action.

But this is just one of many factors.  On my next blog I will explore another factor that I believe has contributed to the aggressive behavior behind school shootings and other social violent acts.

I’d love to hear your thoughts.  We are all in this together and in order to come with a real workable solution we need to stick together.

This site uses Akismet to reduce spam. Learn how your comment data is processed.